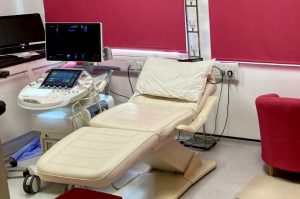 GE is widely acknowledged as being a world leader in ultrasound system technology for women’s healthcare. The company’s GE Voluson Series of ultrasound machines allow gynaecologists and clinicians within the areas of obstetrics, gynaecology and fertility, to undertake complex women’s health examinations with ease, providing precise diagnostics through superior image quality in a time critical manner.

This feature of the GE Voluson E10 makes this ultrasound scanner particularly useful for application in baby scans. In the past clinicians have struggled with having to show proud parents to be grainy black-and-white images of their baby, and sometimes having to draw a picture on top of the ultrasound to help them understand what they are seeing. The GE’s Voluson E10 ultrasound machine offers 4X ultrasound pathways that generate spectacular 2D and 3D/4D images with increased penetration and clarity which massively improves diagnostic capabilities for improved care of the patient. The GE Voluson E10, is also the first ultrasound system in the obstetrics and gynaecology field that has built-in 3D-printing capability which means that doctors can use it to help parents better understand congenital defects such as cleft lips, abnormal extremities or abdominal wall defects. In some cases, 3D printing can enhance discussions about surgical planning and serve as an educational tool. The reproduction of this data for discussion between medical teams and patients from the GE Voluson E10 is of course completely secure to ensure patient confidentiality.

The GE Voluson E10 was designed to superseded but not completely replace the lower priced GE Voluson E8 as it offers four times the processing power of the GE Voluson E8 so enabling advanced applications and efficient workflow. In comparison to the E8, the E10 possesses a larger screen for enhanced viewing of scans, a more sophisticated beam formation, and newer rendering technologies. The exceptional processing power and speed of the GE Voluson E10 mean faster render times and smoother frame rates which provide HD live that is extremely clear and realistic.

At Vertu Medical, we offer the GE Voluson 10 and other models from the range of GE Voluson ultrasound machines. Our team of professionals are happy to discuss your requirements and provide you with the very best advice regarding your purchase. Please get in touch by calling +44 (0)208 392 5161 or email: post@vertumedical.com. We look forward to hearing from you.

We use cookies on our website to give you the most relevant experience by remembering your preferences and repeat visits. By clicking “Accept All”, you consent to the use of ALL the cookies. However, you may visit "Cookie Settings" to provide a controlled consent.
Cookie SettingsAccept All
Manage consent

This website uses cookies to improve your experience while you navigate through the website. Out of these, the cookies that are categorized as necessary are stored on your browser as they are essential for the working of basic functionalities of the website. We also use third-party cookies that help us analyze and understand how you use this website. These cookies will be stored in your browser only with your consent. You also have the option to opt-out of these cookies. But opting out of some of these cookies may affect your browsing experience.
Necessary Always Enabled
Necessary cookies are absolutely essential for the website to function properly. These cookies ensure basic functionalities and security features of the website, anonymously.
Functional
Functional cookies help to perform certain functionalities like sharing the content of the website on social media platforms, collect feedbacks, and other third-party features.
Performance
Performance cookies are used to understand and analyze the key performance indexes of the website which helps in delivering a better user experience for the visitors.
Analytics
Analytical cookies are used to understand how visitors interact with the website. These cookies help provide information on metrics the number of visitors, bounce rate, traffic source, etc.
Advertisement
Advertisement cookies are used to provide visitors with relevant ads and marketing campaigns. These cookies track visitors across websites and collect information to provide customized ads.
Others
Other uncategorized cookies are those that are being analyzed and have not been classified into a category as yet.
SAVE & ACCEPT

You can reach us via any option below: